(Peepeekisis Cree Nation)  Working collaboratively to renew relationships and to right historical wrongs is key to advancing reconciliation with First Nations in Canada.

Today, Chief Francis Dieter and the Honourable Carolyn Bennett, Minister of Crown-Indigenous Relations, announced that the Peepeekisis Cree Nation and the Government of Canada have concluded their negotiated settlement to resolve the File Hills Colony Specific Claim.

Under the settlement, Canada will provide Peepeekisis Cree Nation with $150 million in total compensation, with the option to acquire up to 18,720 acres of land and for said land to be added to reserve in accordance with all applicable laws and Canada’s policies and procedures respecting reserve creation.

“In 1986, 35 years ago we submitted the File Hills Colony Specific Claim. The struggle for some measure of justice has been long and difficult. As we celebrate the File Hills Colony Settlement Agreement, it is important that we acknowledge and remember our elders and members who lived through this dark chapter of our Nation. They have paved the way by contributing invaluable testimony and truths, which have led us to this success today and for our future generations.”

“Peepeekisis Cree Nation was always determined to get a fair resolution and after a long battle, I am relieved that we have reached a Settlement Agreement for the File Hills Colony Specific Claim. Our community has suffered harms but we are a strong people and the Settlement Agreement will allow the Nation to make significant community investments for both today and tomorrow and improve the lives of all community members. It is important that Canadians know this history and the truths of the File Hills Colony Specific Claim.”

“After decades of opposition and denials by Canada and the judicial system, the File Hills Colony Specific Claim has finally been settled. Moving forward this Settlement Agreement will allow our community to close this unfortunate chapter in our shared history, heal and prosper for our future generations. We cannot change the past, but the resolution of this Specific Claim provides us with the opportunity to move forward together within Peepeekisis Cree Nation and with Canada.”

“The “Colony Scheme” forever altered the social and cultural fabric of the Peepeekisis Cree Nation, through the prohibition of pow-wows, dances, and other forms of ceremony, as well as, forced marriages between original members and transferred industrial school graduates. The effects of this colonial policy are still felt by the community today. Everyone in Canada needs to know the truth of what happened. The successful resolution of this specific claim is essential to rebuilding our relationship with Peepeekisis Cree Nation, in a good way. We thank Chief Enock Poitras, Chief Beverly Bellegarde, Chief Francis Dieter and their negotiation team, as well as the entire Peepeekisis Cree Nation for their dedication, perseverance and collaborative efforts. We are committed to working in partnership with Peepeekisis Cree Nation on their priorities for their community, now and in the future. Today is an important step towards healing and reconciliation.”

Join the conversation about Indigenous peoples in Canada: 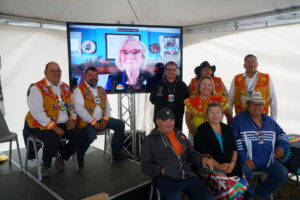