FHQTC AND PASQUA TAKE A STAND AGAINST PROVINCIAL INACTION

(Treaty 4 Territory, SK) – The File Hills Qu’Appelle Tribal Council (“FHQTC”) and Pasqua First Nation (“Pasqua”) are proud to stand up for First Nation lands and waters before the Supreme Court of Canada in the Impact Assessment Act reference case. A key issue in this case is whether Canada has jurisdiction to enact laws regulating the environmental assessment process for intra-provincial projects. 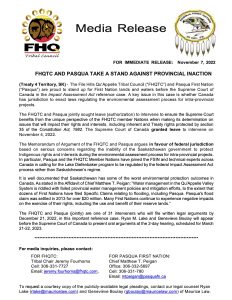 The FHQTC and Pasqua jointly sought leave (authorization) to intervene to ensure the Supreme Court benefits from the unique perspective of the FHQTC member Nations when making its determination on issues that will impact their rights and interests, including inherent and Treaty rights protected by section 35 of the Constitution Act, 1982. The Supreme Court of Canada granted leave to intervene on November 4, 2022.

The Memorandum of Argument of the FHQTC and Pasqua argues in favour of federal jurisdiction based on serious concerns regarding the inability of the Saskatchewan government to protect Indigenous rights and interests during the environmental assessment process for intra-provincial projects. In particular, Pasqua and the FHQTC Member Nations have joined the FSIN and technical experts across Canada in calling for the Lake Diefenbaker program to be regulated by the federal Impact Assessment Act process rather than Saskatchewan’s regime.

It is well documented that Saskatchewan has some of the worst environmental protection outcomes in Canada. As stated in the Affidavit of Chief Matthew T. Peigan: “Water management in the Qu’Appelle Valley System is riddled with failed provincial water management policies and mitigation efforts, to the extent that dozens of First Nations have filed Specific Claims relating to flooding, including Pasqua. Pasqua’s flood claim was settled in 2013 for over $20 million. Many First Nations continue to experience negative impacts on the exercise of their rights, including the use and benefit of their reserve lands.”

The FHQTC and Pasqua (jointly) are one of 31 interveners who will file written legal arguments by December 21, 2022, in this important reference case. Ryan M. Lake and Genevieve Boulay will appear before the Supreme Court of Canada to present oral arguments at the 2-day hearing, scheduled for March 21-22, 2023.