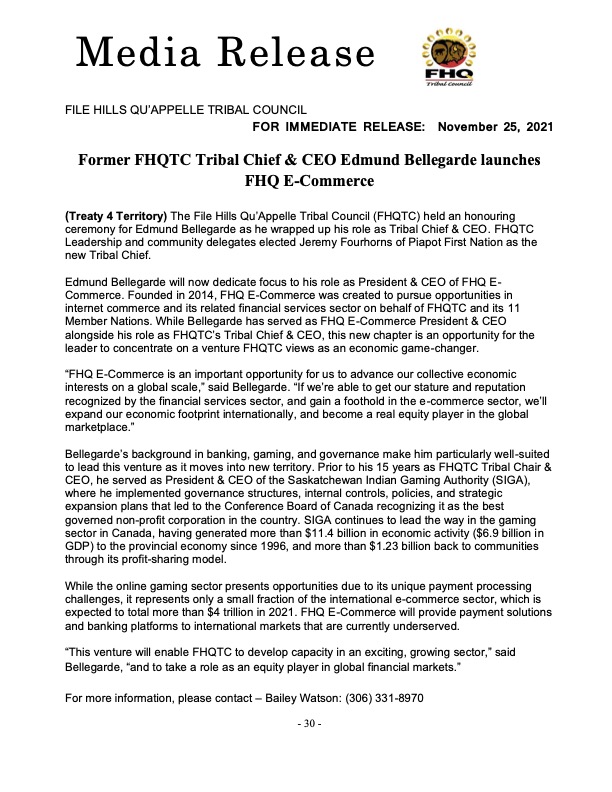 Edmund Bellegarde will now dedicate focus to his role as President & CEO of FHQ E-Commerce. Founded in 2014, FHQ E-Commerce was created to pursue opportunities in internet commerce and its related financial services sector on behalf of FHQTC and its 11 Member Nations. While Bellegarde has served as FHQ E-Commerce President & CEO alongside his role as FHQTC’s Tribal Chief & CEO, this new chapter is an opportunity for the leader to concentrate on a venture FHQTC views as an economic game-changer.

“FHQ E-Commerce is an important opportunity for us to advance our collective economic interests on a global scale,” said Bellegarde. “If we’re able to get our stature and reputation recognized by the financial services sector, and gain a foothold in the e-commerce sector, we’ll expand our economic footprint internationally, and become a real equity player in the global marketplace.”

Bellegarde’s background in banking, gaming, and governance make him particularly well-suited to lead this venture as it moves into new territory. Prior to his 15 years as FHQTC Tribal Chair & CEO, he served as President & CEO of the Saskatchewan Indian Gaming Authority (SIGA), where he implemented governance structures, internal controls, policies, and strategic expansion plans that led to the Conference Board of Canada recognizing it as the best governed non-profit corporation in the country. SIGA continues to lead the way in the gaming sector in Canada, having generated more than $11.4 billion in economic activity ($6.9 billion in GDP) to the provincial economy since 1996, and more than $1.23 billion back to communities through its profit-sharing model.

While the online gaming sector presents opportunities due to its unique payment processing challenges, it represents only a small fraction of the international e-commerce sector, which is expected to total more than $4 trillion in 2021. FHQ E-Commerce will provide payment solutions and banking platforms to international markets that are currently underserved.

“This venture will enable FHQTC to develop capacity in an exciting, growing sector,” said Bellegarde, “and to take a role as an equity player in global financial markets.”