(Treaty 4 Territory, SK) – The leadership of the File Hills Qu’Appelle Tribal Council (FHQTC) are once again frustrated by the complete disregard of Treaty and Inherent Rights, enshrined in Section 35 of the Canadian Constitution, by Saskatchewan Premier Moe and his disastrous Saskatchewan First Act. Premiere Moe and his Sask. Party Government did not reach out for consultation with any of our Member Nations, which represent the largest group of First Nations People in Southern Saskatchewan. 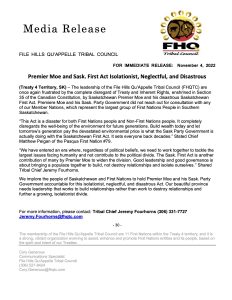 “This Act is a disaster for both First Nations people and Non-First Nations people. It completely disregards the well-being of the environment for future generations. Build wealth today and let tomorrow’s generation pay the devastated environmental price is what the Sask Party Government is actually doing with the Saskatchewan First Act. It sets everyone back decades.” Stated Chief Matthew Peigan of the Pasqua First Nation #79.

“We have entered an era where, regardless of political beliefs, we need to work together to tackle the largest issues facing humanity and not contribute to the political divide. The Sask. First Act is another contribution of many by Premier Moe to widen the division. Good leadership and good governance is about bringing a populace together to build, not destroy relationships and isolate ourselves.” Shared Tribal Chief Jeremy Fourhorns.

We implore the people of Saskatchewan and First Nations to hold Premier Moe and his Sask. Party Government accountable for this isolationist, neglectful, and disastrous Act. Our beautiful province needs leadership that works to build relationships rather than work to destroy relationships and further a growing, isolationist divide.

The membership of the File Hills Qu’Appelle Tribal Council are 11 First Nations within the Treaty 4 territory, and it is a strong, vibrant organization evolving to assist, enhance and promote First Nations entities and its people, based on the spirit and intent of our Treaties.